Here you can find audio recordings of (mainly) tower bells that are not from churches from within our own branch. Those of the bells ringing can be heard using an ordinary MP3 player. Those of the bells striking may be used within a sequencer, such as Abel, to simulate the sound of the ring. Getting a perfect recording is always very difficult, but I hope you enjoy listening to these as much as I did in their making. You can, of course, hear more recordings on the Towers page. Where shown, details of the bells come from Frederick Sharpe (1953) The Church Bells of Oxfordshire J Smart & Co Brackley. The hum, prime and nominal frequencies were found from the individual bell recordings using Wavanal. The given note names were calculated from these frequencies using a twelve-tone equal tempered scale [12-TET] with A at 440Hz. 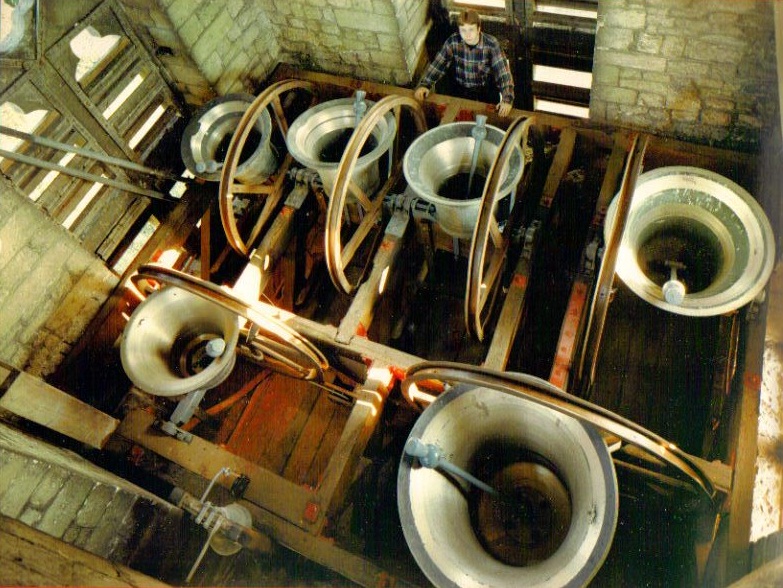 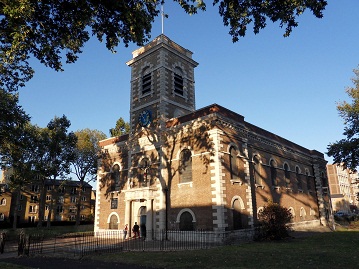 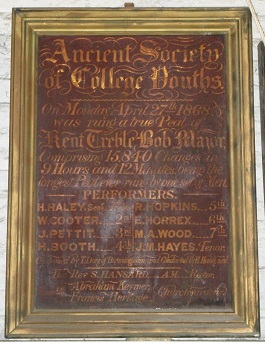 A peal board
St Matthew · Bethnal Green · London Dorothy L Sayers' drama of The Nine Tailors is, of course, played against the ever present background music of the bells of Fenchurch St Paul's. Less well known is that the long peal of Kent Treble Bob Major was inspired by the performance of the same 15,840 changes of Kent, rung at St Matthew's on 27th April 1868 by members of the Ancient Society of College Youths, and recorded on a peal board in the ringing chamber (see right and below).

Ringing chamber
Photographs of these ringers may be found on the ASCY website. The bells were cast by George Mears of Whitechapel in 1861, following a fire in the church in 1859. On September 7th 1940, the first night of the blitz, an incendiary bomb struck the church and all was destroyed except for the perimeter walls, the tower and its bells. Later, in 1961, a new church was built inside the walls and the foot of the tower was rebuilt. Although the 1861 bells were not damaged, they had fallen into disuse and disrepair owing to the condition of the church between 1940 and 1961. With the assistance of the Whitechapel Bell Foundry, a small group of volunteers has now brought this historic ring back into regular use. They were given permission by the Rector and Churchwardens and also received consent from the Chancellor of the Diocese of London. Philip Vracas

*Editor's Note These bells were originally recorded as being tuned to the key of F and this is certainly true of their hum notes. However, the current recordings show that their nominals are instead in E.

Ancient Society
of College Youths
On Monday April 27th 1868
was rung a true Peal of
Kent Treble Bob Major
Comprising 15,840 changes in
9 Hours and 12 Minutes, being the
longest Peal ever rung by one set of Men.
PERFORMERS Composed by T. Day of Birmingham and Conducted by H. Haley Senr
The Rev H. HANSARD A.M. Rector
Saint Matthew's
Tower Bells
showing the hum, prime
and nominal of each
Their key is closer to E than F 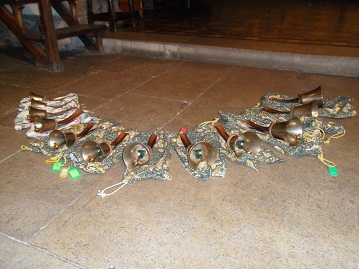 The handbells at St Giles

These handbells belong to the ringers at St Giles church in Oxford City Centre. The recording of Five Rings Triples above is a simulation of the back eight ringing a plain course of Howard Skempton's composition for the Olympic Games in 2012. More details can be found on the CCCBR website. Because there are twelve bells in total, I have also added a recording of Five Rings Cinques, though this hasn't actually been approved by the composer himself. It does sound rather nice. You can also now hear them ringing Titanic Cinques, marking the centenary of the sinking of the RMS Titanic on 15th April 1912. 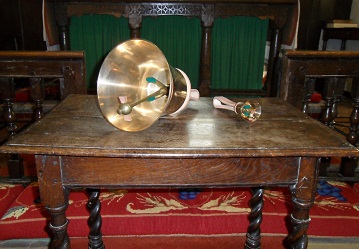 Lowest A0 and highest C4

The Marston St Nicholas ringers' set comprises thirty seven handbells in total. They have a range of just over three octaves from C4 (2093Hz) to A0 (220Hz). Tuned with equal temperament, their notes are shown in the table below. The largest and smallest of these bells can be seen in the picture above. That photograph was taken in the chancel of Marston's church, in whose very lively acoustic I recorded each of them sounding in July 2011. Since I wished to maximise the number in a given key, I sharpened digitally the highest note from C4 to C♯4 (shown in brackets in the table above), giving me twenty four in the key of A. Simulated recordings of them ringing can be heard by clicking on the links in the table above. As a point of interest, there are more than six times ten to the power of twenty three [ 24! = 620,448,401,733,239,439,360,000 ] unique ways of arranging the order of twenty four bells. This is comparable with the estimated number of stars in the visible universe and it would take roughly 3.9 million billion years to ring every one of those at a speed of five striking per second. In comparison, the current age of the universe is derived from scientific deduction to be only about 13.8 billion years. Fortunately for us, Stedman Undecuples [Stedman 23] contains only 276 rows of changes and it lasts for less than twenty four minutes at that speed. You can also hear the Marston bells ring Philip Earis's composition of one hundred changes on twenty four bells. This was originally performed, by twelve people, at the Ringing World Centenary celebrations, Westminster Central Hall, on 26 March 2011. 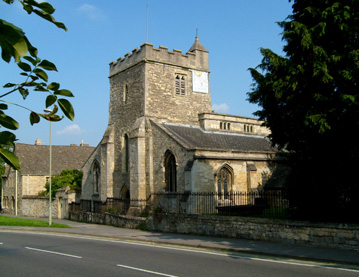 Sundial
The church of St Cross · Holywell · Oxford City was originally built in about 1160. A tower was added in the late C13th and it houses six bells ranging in date from 1620 (the fifth) to 1874 (the treble). They hang from a frame of cast iron installed by Messrs J Taylor & Co. The date painted above the tower's sundial reads A.D. MDCCCIII (1803). A rambling churchyard contains the graves of many famous people, including that of Kenneth Grahame, the author of The Wind in the Willows. Next to the church is Holywell Manor, hosting post-graduate students of Balliol College. The church itself has now also been acquired by Balliol, to become its Historic Collections Centre. The recording of the bells ringing was made on the 24th of September 2008, during a quarter peal of Norwich Surprise Minor by Oxford University Society ringers. That of the bells striking was taken during the final Sunday service on 12-10-08. Now that the church is deconsecrated, it is not known whether its bells will ever be heard again. 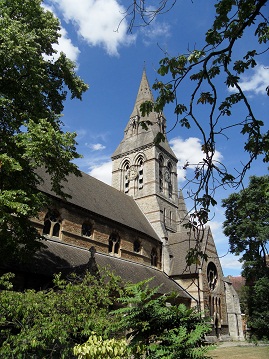 Designed by the Diocesan architect GE Street, the foundation stone of St Philip & St James was laid down in 1860. It was completed and consecrated in 1862, with the tower and spire being added later by 1866. A half skeleton clock, with four faces, and its bell were added in 1896. The tower itself is probably not sufficiently strong to carry a peal of bells. This church served the then newly-built area between St Giles and the hamlet of Summertown to the north. It was later declared redundant in 1982, to become The Oxford Centre for Mission Studies (OCMS) in 1983. The recording above demonstrates that the clapper bounces (chiming twice each time), which can create the illusion that this bell is being rung full circle. 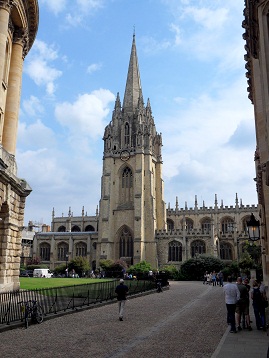 SMV · Oxford City Centre This tower dates from around 1270, with the spire being added in the 1320s. Hanging from an oaken frame made in 1894 by the Loughborough Bellfoundry, the bells range in date from 1612 to 1894. The fourth, cast in the same year as the fifth in 1612, is known as the music bell because it is inscribed with two bands of music encircling its entire circumference. As in the picture above, the audio recording was made from within the Radcliffe Square, demonstrating the sonorous and mournful sound of these bells. 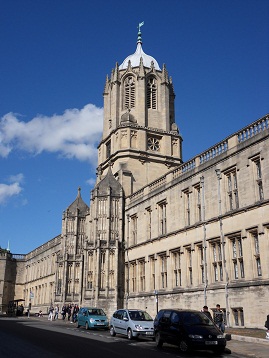 Great Tom · Oxford City Centre After the dissolution of the monasteries between 1536 and 1541, it is believed that approximately eight bells, including Great Tom and the litany bell, were moved from Oseney Abbey to Christ Church Cathedral in 1546. Oseney Abbey was situated some 350 yards to the southwest of the present church of St Thomas in Oxford and was surrendered to King Henry VIII in 1539. Later, in the year 1678, Great Tom was moved from the central tower of the Cathedral to be recast. When it was taken from the Abbey, it is believed to have been 72 inches in diameter and therefore it must have weighed no more than 4 tons. In the sixteenth and seventeenth centuries, Great Tom's clapper needed frequent repairs. The bell was also recast at least six times in the seventeenth century. Finally, Christopher Hodson undertook to cast a bell 84 inches in diameter. He succeeded at his first attempt in 1680. 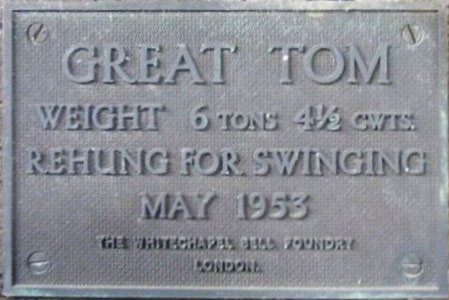 The tower over the gateway leading into the great quadrangle of Christ Church was built under the direction of Sir Christopher Wren in 1682, and later we find that two of his chief masons were employed to hoist Tom into it. The bell is abnormally thick in certain places, which accounts for its unique partial tones. It is an Old Standard bell, with a distinct charm of its own, and its great booming tones are well-known to Oxonians. Its strike-note is approximately A natural. Judged solely by the standards of modern bell-founding, the tone of the bell would be considered poor, because its partial tones are not harmonically true. However, no attempt has ever been made to tune it. Great Tom is struck by the clock between 8am and 9pm, and every evening at five minutes past nine it is tolled for 101 strokes taking 4.5 minutes (Oxford Time was originally 5 minutes and 2 seconds behind Greenwich Time). This was intended as a signal for the closing of the college gates, but its purpose is now obsolete. One stroke was given for every student attached to the original foundation of Christ Church College, plus one for an additional studentship added in 1664 under the bequest of William Thurston. The bell is also tolled by swinging on special occasions. The true weight of Tom (6.325 tonnes) had remained a mystery until 1953, when it was re-hung by the Whitechapel Bell Foundry of London. This enabled it once more to swing on its wheel, which had not been possible since 1847. Source: Sharpe 1953. 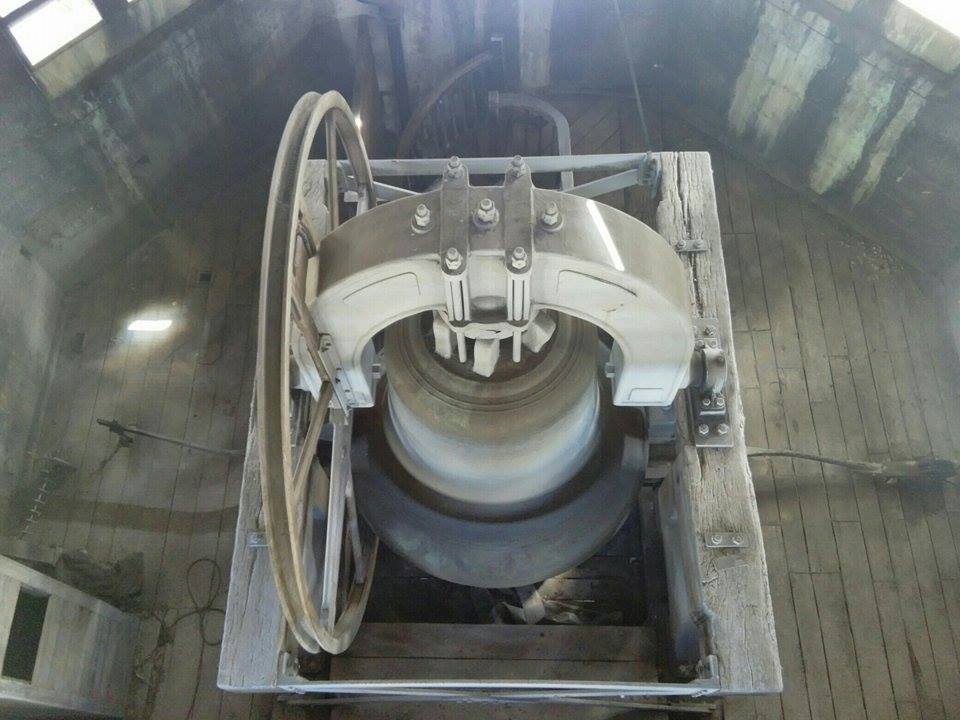 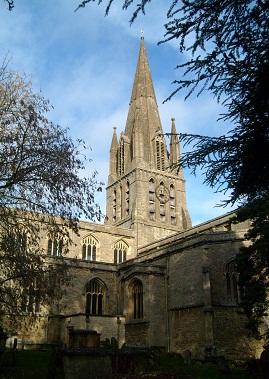 The town of Witney came to prominence during Saxon times, and expanded again in the years leading up to the Reformation. The Bishops of Winchester had a palace here which they used as a country residence, and the remains of which are to be found at the rear of the parish church of St Mary the Virgin. For many centuries Witney was a pivotal centre for the weaving of blanket cloth due to the waters of the Windrush containing nitrous qualities suitable for the fulling process. Church Green is surrounded by the very impressive presence of the church, the buttercross and the rows of C16th and C17th almshouses. This ring of eight always leaves a good impression. Hugh Deam